Meet Our Guests of Honor

We are pleased to welcome this years Guests of Honor

Howard’s Bio :
Born in Mississippi and now living in Austin, Texas, Howard Waldrop is an American iconoclast.
His highly original books include Them Bones and A Dozen Tough Jobs, and the collections Howard Who?, All About Strange Monsters of the Recent Past, Night of the Cooters, Things Will Never Be the Same, as well as Other Worlds, Better Lives.

Several of his stories have been nominated for the genre’s awards; “The Ugly Chickens” won a Nebula Award for best novelette in 1980, and a World Fantasy Award for Short Fiction in 1981.

“Howard Waldrop doesn’t have e-mail. He doesn’t have a word processor. He doesn’t surf the Internet. I guess that means he spends most of his time writing. From my point of view as a devoted Waldrop reader, I’m eternally grateful to the Luddite in him.” – Janis Ian

“An authentic master of gonzo sf and fantasy.” — Booklist

“Waldrop subtly mutates the past, extrapolating the changes into some of the most insightful, and frequently amusing, stories being written today, in or out of the science fiction genre.” – The Houston Post/Sun

“The resident Weird Mind of his generation, he writes like a honky-tonk angel.… If Philip K. Dick is our homegrown Borges (as Ursula K. Le Guin once said), then Waldrop is our very American magic-realist, as imaginative and playful as early Garcia Marquez or, better yet, Italo Calvino.” – Michael Dirda, Washington Post Book World

Often cited as “one of the most intelligent people of the computer age,” and holds over 100 patents for technological innovations used in telephones, digital media, video conferencing, self-driving cars, and the internet.

Recently retired from IBM, she has been named a “Distinguished Engineer,” and won the 2012 Kate Gleason Award for lifetime achievement in technology from the American Society of Mechanical Engineers (ASME). 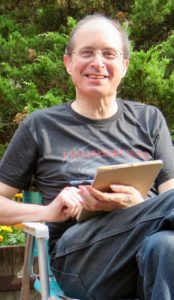 Moshe’s Bio (courtesy of Moshe Feder) :
A time traveler in training, an alien spy, or perhaps merely an aspiring renaissance man, Moshe acquires and edits bestselling Science Fiction and Fantasy as a Consulting Senior Editor for Tor Books, a division of Macmillan which recently moved from the Flatiron Building in midtown to the landmark Equitable Building on lower Broadway across the street from where Alexander Hamilton is buried.

Moshe began his editorial career while still in college when he worked part time as Assistant Editor for the magazines Amazing and Fantastic. Later, he was an SF&F reviewer for Publishers Weekly and Science Fiction Chronicle, Assistant Editor of the SF Book Club, Editor in Chief of the Military Book Club, a reviewer for Asimov’s SF Magazine, and an Associate Editor and Editor at Tor Books, which he joined in 2000.

He has been a judge for the World Fantasy Awards and a member of the Sidewise Awards jury. His first and only short story appeared in Damon Knight’s Orbit 16 in 1975. A 2011 nominee for the Best Editor Hugo Award, he had his first #1 New York Times bestseller with 2014’s Words of Radiance by Brandon Sanderson. In 2015 he was honored by NESFA with the Edward E. Smith Memorial Award (known as “the Skylark”) recognizing his devotion to the field as both a fan and a pro.

Moshe lives in Flushing, NY with his cat Nemo (jointly named for the captain and the Winsor McCay character, not the fish). He’ll be happy to explain why you’ve probably never eaten bagels and lox, even though you’re sure you have.