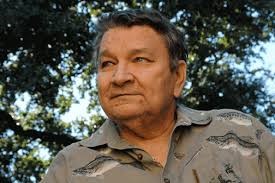 Born in Mississippi and now living in Austin, Texas, Howard Waldrop is an American iconoclast.
His highly original books include Them Bones and A Dozen Tough Jobs, and the collections Howard Who?, All About Strange Monsters of the Recent Past, Night of the Cooters, Things Will Never Be the Same, as well as Other Worlds, Better Lives.

Several of his stories have been nominated for the genre’s awards; “The Ugly Chickens” won a Nebula Award for best novelette in 1980, and a World Fantasy Award for Short Fiction in 1981.

“Howard Waldrop doesn’t have e-mail. He doesn’t have a word processor. He doesn’t surf the Internet. I guess that means he spends most of his time writing. From my point of view as a devoted Waldrop reader, I’m eternally grateful to the Luddite in him.” – Janis Ian

“There’s never been anyone like him, in or out of science fiction.” – George R.R. Martin

“You want weird? Howard’s got weird. You want mind-bending? You’re about to get it.” – Cory Doctorow

“The man’s a national treasure!” – Locus

“An authentic master of gonzo sf and fantasy.” — Booklist

“Waldrop subtly mutates the past, extrapolating the changes into some of the most insightful, and frequently amusing, stories being written today, in or out of the science fiction genre.” – The Houston Post/Sun

“The resident Weird Mind of his generation, he writes like a honky-tonk angel.… If Philip K. Dick is our homegrown Borges (as Ursula K. Le Guin once said), then Waldrop is our very American magic-realist, as imaginative and playful as early Garcia Marquez or, better yet, Italo Calvino.” – Michael Dirda, Washington Post Book World