This year we will be taking up two Classics of Science Fiction, one discussion each. Come to either or both. You’ll be welcome to join in.

Our working definition is “A classic is a work that survives its own time. After the currents which might have sustained it have changed, it remains, and is seen to be worthwhile for itself.” If you have a better definition, bring it.

Each of our two is famous in a different way. Each may be more interesting now than when first published. Have you read them? Have you re-read them? 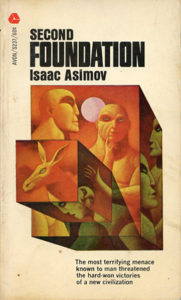 Thousands of years in the future humanity has merged into a galactic empire. One man, Hari Seldon, foresees its collapse. He establishes a Foundation to preserve knowledge and advance technology so the dark age afterward will be shorter. He hints at a Second Foundation behind.

The almost-secret Seldon Plan succeeds for centuries. Another man, a powerful mutant known only as the Mule, gains interstellar power and grows impatient. To re-unite the worlds himself he searches for the Second Foundation. He can read and control emotion. Who could hide from him?

The Mule has a human lifespan and no heir. The Foundation itself then becomes distrustful. The Second Foundation, if it exists, begins to seem dangerous, and anyway needless. The Foundation’s superior science should be able to find and eliminate it. A fourteen-year-old girl proves to be the heart of the story.

We get few authors like this one, who took a triple first (highest honors in three subjects) at Oxford, taught there three decades, then accepted a chair at Cambridge and taught there another decade until his death. He was a friend of Tolkien’s.

He opens the novel as the narrator. The first thing he does is leave a railway station and start a three-mile walk: we’re in another world. It’s 1940s England; so there are blackout curtains, and language (and thought) not quite like the 1940s in the United States. Far stranger things lie ahead.

The protagonist, a man named Ransom, goes to Venus, given as a world possible at the time of writing, and described poetically. Indeed this is a highly poetic book. His journey is not only of sight and sound, but of mind. He lands in a world-shaking argument. His opponent is extraordinary. Watch the author’s characterization.

Is the moment near the end of the last chapter – only seven hundred words – comparable to Olaf Stapledon’s Star Maker (1937)?

A Netherlander has posted a glossary of allusions and quotations here.