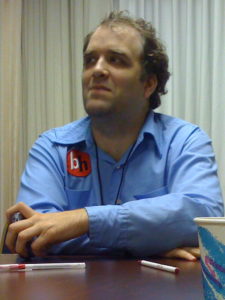 R K Milholland, our Artist Guest of Honor, is an editorial comic artist, is best known for his long running semi autobiographical web comic Something Positive.

Through the adventures and misadventures of Davan, Milholland offers nearly 20 years of dark witty commentary on modern life as a fan. Adapting to the ever developing world of internet publications, he was an early pioneer of micropatronage, quitting his day job to focus on full time on his art in 2004 and has been going strong ever since. He is also know for spinoff comics Something Positive 1937 and Midnight Macabre, as well as original comics New Gold Dreams and Super Stupor.

His interests include community theater, role playing games, and lounging lazily at conventions. Today he lives in Georgia, distributing art and sarcasm in his wake.