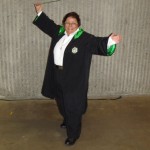 Yvonne Penney is a Franco-Ontarian who is a native of Toronto, and claims she’s old enough to have watched the original run of Star Trek. After living for two years in the much warmer climes of San Diego, California and Yuma, Arizona, she returned to Toronto in 1978, and discovered fandom and SF cons. None of the above have been the same since.

She was introduced to fandom through Star Trek, Star Wars and other SF/media films and television shows. In high school, her grade 12 English teacher introduced her to Ray Bradbury, John Wyndham and other SF authors. She re-discovered SF books and began by reading Arthur C. Clarke, Isaac Asimov and the other usual suspects. Reading also brought about renewed interests in astronomy, the space programme and space exploration.

The convention bug bit Yvonne in a big way. She and her husband Lloyd were two of the founders and chairmen of Toronto Trek Celebration, the predecessor of the Toronto Trek/Polaris series of conventions, and Yvonne was the chairman of Toronto Trek Celebration 2. She worked on the Ad Astra committee on and off for 30 years, and has now retired. She is responsible for Ad Astra’s long-standing tradition of tacky tropical shirts for the committee and guests. She has made hundreds of shirts.
After years working on the successful Toronto in 2003 Worldcon bid, Yvonne returned to one of her first loves, space and aviation, and she was involved with the X Prize Foundation as well as The Planetary Society, the Canadian Space Society, the Royal Astronomical Society of Canada, and the Mars Society. She also tried her hand at getting her pilot’s license.

Now, Yvonne and her husband are involved in steampunk. She designs and creates hats.