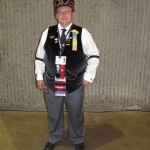 Lloyd Penney is a native and resident of Toronto, and found the fun and insanity of fandom in late 1977 through a Star Trek club in Victoria, British Columbia. Even earlier than that, he discovered, through his mother, the science fiction anthology, finding the collections of Carr, Gold and Wollheim, plus the novels of Asimov, Bradbury, Clarke and so many more.

He moved to Toronto for higher education, and found fandom there, too. He joined TAPA, the local amateur press association, and the Ad Astra SF convention committee, and for the next 30 years held positions, like dealer room chief, planning head and eventually chairman. He has also been on committees for other conventions in Toronto (chaired a Smofcon), Ottawa, Buffalo, Rochester and other places, and has been connected with various Worldcon bids, including British bids, and even the Yugoslavian bid in 1993, but especially the Toronto in 2003 Worldcon bid. He has now retired from concom positions, and now finds it amazingly easy to say no.

He’s been involved with clubs, cons, and special projects and displays, was a member of the Star Trek Welcommittee for 15 years, and was involved in costuming and masquerade fandom also for about 15 years, but his major interest now is in fanzines, and the letter columns within, where he has been for about 30 years. He’s written a number of articles and book and fanzine review columns over the years, but the locol is where he’s been the longest.

Lloyd has won two Aurora Awards and five FAAn Awards over the years, and was nominated for a Hugo Award in the category of Best Fan Writer in 2010.

His current interest outside of fanzines is steampunk, which has revived his interest in costuming. It’s also allowed him to get creative, and make assorted kinds of steampunk jewellery.