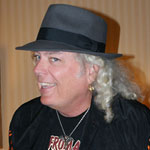 Alan came into fandom through the grisly, yet pun-filled pages of Famous Monsters of Filmland magazine in 1960. Dripping with that Fanboy essence, he was one of the dedicated legion of Ackerfans, and produced his first sorry excuse for a fanzine in 1963 followed by two conventions in 1963 and ’64. Thus he began contributing 50 years of art and articles to zines and conventions. Except for his failing eyesight, high blood pressure, and gray hair, he claims it seems “Just like yesterday”.

A familiar face in Los Angeles Fandom (depending where you looked), he was the Vice President of Dr. Donald A. Reed’s “The Count Dracula Society”, and co-founder of “The Academy of Science Fiction, Fantasy and Horror Films”.

Since 1968 he created art for T-Shirts, managed a movie theater on Hollywood Blvd., wrote an internationally syndicated movie review column, worked in and around the motion picture industry for 20 years designing advertising material. He was a panelist at several conventions, Art Guest of Honor at the 2nd British Star Trek Convention in 1975, and has has been blessed with a smattering of awards for art and photography.

He’s now married, retired, living in Las Vegas and feels that whatever hasn’t turned gray, fallen off or no longer functions, hasn’t kept him from doing zine, and book covers, producing several conventions, film festivals, and designing websites. He is now running the movie review website “Cineholics.com” with TAFF winner Jacq Monahan, and has completed his first books: The Zombie Effect and A View from the Gurney, now available from Amazon.com.

He hopes to meet everyone this year, especially those with chocolate.